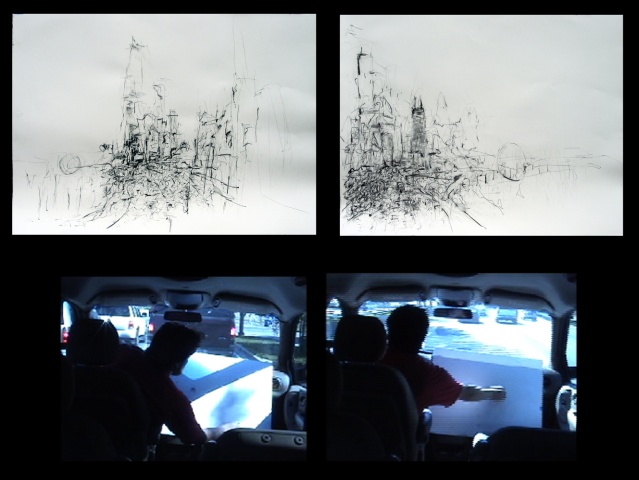 Drawing on LSD
< previous next >

In his recent work, Juan William Chavez often uses a process that he calls “live drawing” to transform his own relationship to familiar imagery. He draws while in the midst of everyday actions: viewing a movie or a sporting event on TV, for instance, or watching the city through a car’s window. Chavez’s Dra wing on LSD (2005) is structured as an installation in which one first encounters two gestural charcoal drawings that depict chaotically abstracted cityscapes. A video in an adjacent space clarifies the humorous and perilous circumstances in which they were made. Chavez set up a camera inside his car and filmed himself while he simultaneously sketched and drove along Chicago ’s fa mous Lake Shore Drive . These quickly made, overlapping images capture the changing views of the city framed by the car windshield during Chavez’s north and south bound drives—the same urban landscape seen daily by thousands of commuters going into the city to work.