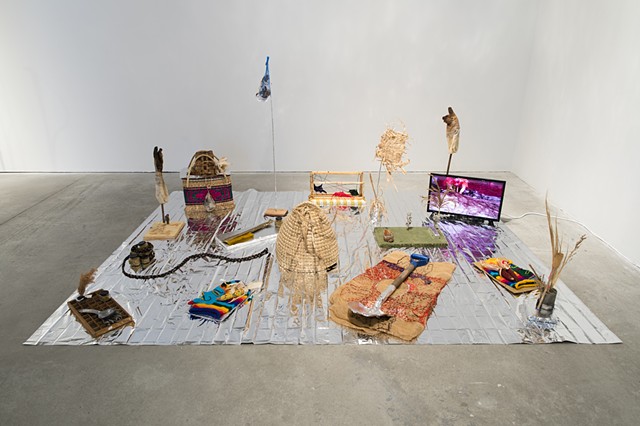 Monarchs: Brown and Native Contemporary Artists in the Path of the Butterfly takes the migration path of the Monarch butterfly, as a geographic range and a metaphor. The butterfly crosses the border of the United States at its junctions with Canada at the north and Mexico in the south along the entire length of both of these conceptual divides. Bypassing the hotter, desert regions of the country, Monarchs flock along its western and eastern coastal edges, but the busiest path of the orange-and-black butterfly is through the center of the United States. The Monarch travels through Midwestern states of Minnesota, Wisconsin, and Illinois, across the Great Plains of Nebraska, Kansas, and Oklahoma, onwards through the Texas Hill Country all the way to the state of Michoacan in Mexico. The path of the butterfly also connects the site of the Dakota Access Pipeline where it crosses the Missouri River at the border of the Standing Rock nation to the U.S.-Mexico border, but the butterfly itself is indifferent to these artificial borders and conceptual divisions.

The exhibition Monarchs sees the defense of Standing Rock and the threat to build a border wall as continuous issues that pose challenges to people native to the Americas who have been separated by conceptual categories of indigenous, immigrant, and assimilated. Like the butterfly, which takes four generations to make the complete migratory path navigating its way through the center of the United States by drawing from inherited knowledge, these artists also pull from ancestral and cultural memory to reveal the deep conceptual legacies underpinning abstraction, reorient historical and art historical narratives, and explore centuries-old trade routes that moved aesthetics in addition to goods. Monarchs considers how objects, still and moving images, sound, and performances made by artists living in the path of the butterfly reveal their identities through form, process, and materiality rather than through content. To create the exhibition, Bemis Curator-in-Residence Risa Puleo looked to the butterfly for inspiration for the exhibition’s primary themes:

Migrations: The length of the Monarch's migratory path is over 3,000 miles long, and unlike any other butterfly, the Monarch makes this path twice. The butterflies cross two international borders and dozens of states. Rodrigo Valenzuela explores the landscape of migration along the U.S.-Mexico border while Sky Hopinka, Francisco Souto, and Wendy Red Star employ road trips as their means of moving across the United States. Other types of movement including immigration to displacement, itinerancy, nomadism, and also the condition of being immobilized are explored by William Cordova, Gonzalo Reyes Rodriguez, Marty Two Bulls Jr., and Cannupa Hanska Luger. Nancy Friedemann-Sánchez and Harold Mendez examine how objects were moved across centuries-old trade routes, bringing aesthetics and styles with them across vast expanses of space.

Inheritance: No one butterfly completes the trek from the U.S.-Canada border across the U.S. to the butterfly forests of Michoacán, where individual butterflies often return to the same Oyamel Fir tree as their ancestors. They do so by drawing from knowledge inherited from butterflies who forged the path before them. Artists in Monarchs also pull from ancestral and cultural memory speaking to an inherited means of production and genealogy of form. Truman Lowe transforms the basket weaving techniques taught to him by his parents while Margarita Cabrera learned the craft of copper hammering of Santa Clara del Cobre, a town in Michoacán. Ronny Quevedo, Rafa Esparza, and Carlos Rosales-Silva incorporate building materials such as drywall, adobe, and plaster respectively into their paintings as an homage to constructing buildings and working-class labor.

Transformation: Over the course of its life, the Monarch butterfly takes on radically different forms, transforming from egg to caterpillar, chrysalis, and, finally, butterfly. Artists like Jeffery Gibson, Mary Valverde, Donna Huanca, and Ivan Lozano explore how costume and textiles join forces with performance to form the basis of sacred ritual and ceremony that provide passageways to the spiritual.

Monarchs: Brown and Native Contemporary Artists in the Path of the Butterfly is curated by Risa Puleo, 2017 Bemis Center Curator-in-Residence.